A Gift for A Beauty Queen 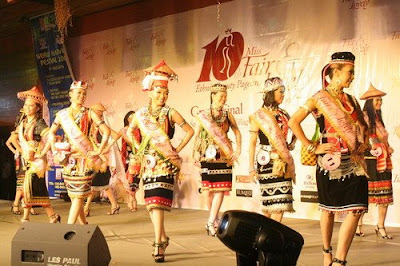 There she is in front doing the pageant routine during the final.
Courtesy: WHF' 08 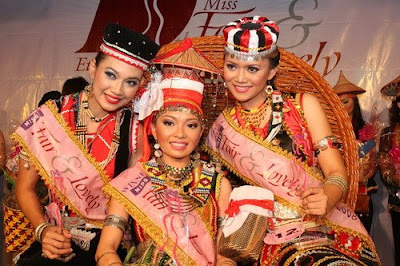 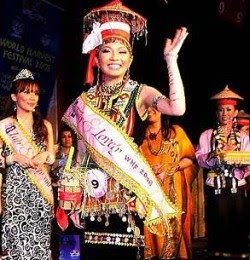 After being crowned
Courtesy: the StarOnline 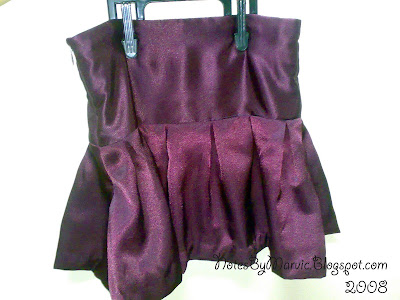 Mini Skirt; a gift from a friend

I made this purple mini skirt for a friend of mine, Perlycia Laura Brooke that won herself a winning crown as Miss Fair & Lovely 2008 in conjunction with World Harvest Festival 2008 in Sarawak Cultural Village, Santubong Sarawak. This event took place in last May 2008.
I was supposed to post this earlier but failed because of my workload until I found this pictures in one of my folder.
We were supposed to join this together few years ago but then we didnt because I was being transfered here in KL and she is busy with her master study in Unimas. At last she made it this year despite being disqualified two year ago because of her height. But nevermind pearl, I'll be joining the Kumang Gawai next year if still organising the pageant and if only my age still can be accepted...LOL....

The costumes they are wearing is an Bidayuh traditional costumes. I am a Bidayuh as well. Bidayuh is the collective name for several indigenous groups found in southern Sarawak, on the island of Borneo, that are broadly similar in language and culture. The name "Bidayuh" means 'inhabitants of land'. Originally from the western part of Borneo, the collective name Land Dayaks was first used during the period of Rajah James Brooke, the White Rajah of Sarawak. They constitute one of the main indigenous groups in Sarawak and live in towns and villages around Kuching and Samarahan in the Malaysian state of Sarawak. Related groups are also found in west Kalimantan. In Sarawak, most of Bidayuh population are found within 40 km of the geographical area known as Greater Kuching, within the Kuching and Samarahan division. They are the second largest Dayak ethnic group in Sarawak after the Iban.

Each year, all the indigenous community in Sarawak (may include the Bidayuh, the Iban, the Orang Ulu) will organised various kind of activities to celebrate the harvest festival or better known as Gawai Dayak. This may include, Kumang & Keling Gawai (a traditional beauty queen & king pageant). Normally, each village will held this Kumang Gawai in a small scale to select the most beautiful girl and then will represent their village in the district championship, then later the winner will compete again by division. Each three top three then will competing with winners from other division to win the state's Kumang Gawai.

Nowadays, this beauty pageant are still being held in a traditional way either in the village, district or by division. But Miss Fair & Lovely beauty pageant (with the same concept as Kumang Gawai) came in the highlights during the World Harvest Festival that has been held in Sarawak Cultural Village for so many years. Till next year, I will post more about this celebration.