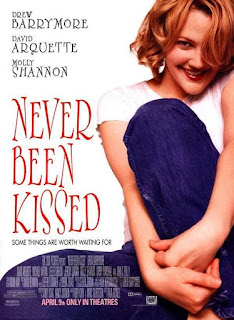 Never Been Kissed is another movie that i love to watch..the story plots was so terrific. i loves it so much...and i hate people who like to bully other students...i'd experienced it when i was in my primary school year..

here is the story plot;

Barrymore plays 25-year-old Josie Geller, a one-time high school misfit turned pedantic and lonely copy-editor for the Chicago Sun-Times. Josie desperately wants to be a reporter, and constantly sends story ideas to her boss, Gus (John C. Reilly). One day during a staff meeting, the tyrannical editor-in-chief, Rigfort (Garry Marshall), assigns her to pose as a high school student for her first story, an undercover feature. The aim of the story is to gain the trust of the pretty, popular girls (including Kirsten, played by Jessica Alba), who are stereotypically vain and intolerant of anyone who is not like them; and the high school heart-throb, Guy Perkins (Jeremy Jordan). At first, despite her best efforts and the support of her best friend at the paper, Anita (Molly Shannon), Josie reverts back to her geeky, misfit, high school persona, and becomes friends with fellow geek Aldys (Leelee Sobieski). However, after counselling by her brother, Rob (and with the benefit of hindsight of her original high school career), Josie learns how to not only fit in, but thrive. A subplot involving the attraction between Josie (who has never had a romance) and young English teacher Sam Coulson is complicated by the fact that Sam thinks Josie is 17-years-old and a student, and therefore out of bounds.
Posted by marvicn.com